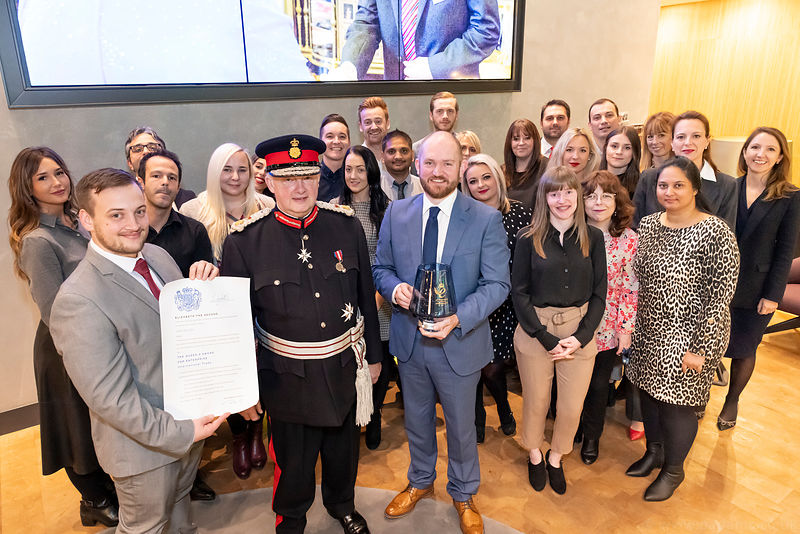 ParkVia, has this week welcomed a royal visitor to its head office to formally receive its second prestigious Queen’s Award for Enterprise in International Trade.

The Queen’s personal representative, Mr Warren Smith JP, Her Majesty’s Lord-Lieutenant of Greater Manchester, attended a ceremony hosted by ParkVia to present Managing Director, Mark Pegler with the official Queen’s Award trophy and celebrate the importance of the occasion with the wider team.

During his visit, the Lord-Lieutenant was introduced to each of the company’s department teams and was given a first-hand insight into how ParkVia’s award-winning entry was realised.

Following its outstanding continuous expansion in international sales over the last six years, ParkVia impressed with a total overseas growth of 223%, having extended its network of car parks to 43 countries and establishing itself as the European leader in its field.

As the highest official UK awards for British businesses, Queen’s Awards for Enterprise entries require the approval of both the UK Prime Minister and Her Majesty, The Queen.

“To have the opportunity to celebrate our second Queen’s Award for Enterprise alongside the team has been a very proud moment. As noted by the Lord-Lieutenant in his address, our continued success has only been made possible by the collective efforts of our hardworking team, and I am thrilled that this has been acknowledged with such a prestigious accolade.”

Having secured its inaugural award in 2014, ParkVia is one of only 200 companies nationally to have a received an award in 2019.