Of those who are not vaccinated against Covid-19, 77% would consider taking the Covid-19 vaccine if this was a requirement to travel by plane in the future

This statistic was especially interesting to us as it suggests that despite some strong and well publicised opposition to the Covid-19 vaccine, the data suggests that the vast majority of unvaccinated respondents feel more strongly about retaining basic freedoms such as air travel.

Whilst there is no suggestion at present that vaccination against Covid-19 will be made mandatory for air travel, this data suggests that such a policy would not have a disastrous effect on demand for air travel.

Pre-departure testing is currently a requirement for unvaccinated travellers and travellers flying to certain destinations. The requirement for swab tests has caused well publicised disruption at airports this winter, but as this is gradually being rolled back (i.e. for travellers heading to the UK from 14th February) we wanted to know how many passengers would continue to take this responsibility on themselves.

This statistic is promising as it suggests that even without expensive and inconvenient mandatory testing, most of the population can be relied on to continue to take responsibility for trying to limit the spread of the virus themselves when they travel by plane. There was no significant difference in the likelihood of unvaccinated travellers to voluntarily test themselves pre-departure than vaccinated travellers.

Attitudes to flying during the Covid-19 Pandemic

We wanted to take a snapshot of the attitudes of Italian travellers towards flying during the pandemic and to better understand the motives behind them.

We found that two thirds (67%) of respondents would consider flying whilst Covid-19 restrictions are in place whilst 17% would not consider this.

7% of our respondents have already travelled by plane at least once during the pandemic (in 2021 or 2022) however would not consider flying again whilst Covid-19 restrictions are in place.

“Covid-19 restrictions” were defined as requirement of a negative Covid-19 test result, proof of recent recovery from Covid-19, proof of double vaccination to fly, as well as potential isolation upon arrival at destination or back home.

When we looked at how attitudes towards flying with Covid-19 restrictions in place differed by age, we found that the 25 to 34 age group were the most likely to consider flying whilst restrictions are in place whilst older groups (45 to 54 and 55 and over) were the least likely.

We wanted to find out which aspects of flying during the Covid-19 pandemic were most off-putting to travellers.

When asked if they were due to fly in the next 3 months, which would be the most off-putting aspect of air travel, over half (51%) said the risk of their flight being cancelled at short notice

And 8% say trouble getting to the airport due to strikes/cancellations would be most off putting.

We wanted to learn the impact Covid 19 has had on travellers having to cancel planned trips involving flying.

Our survey found that 1 in 3 (33%) of respondents have chosen to cancel trips involving flying they had booked, due to Covid-19 related factors.

Interestingly, our results showed that the older respondents were, the less likely they were to cancel a planned trip involving flying due to Covid-19 related factors. Older respondents (aged 45 to 54 and 55 and over) were also less likely on average to have a trip booked in the first place. The table below excludes those respondents who did not have any trips booked.

We also asked respondents for the primary reason why they chose to cancel their trip.

Unsurprisingly the fear of catching Covid whilst away or while travelling was the most common reason for cancelling a trip involving flying, with over half (51%) of respondents citing this as their primary reason. 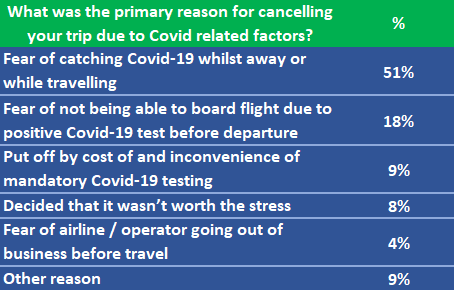 We also wanted to know how much money travellers had lost as a result of choosing to cancel these trips.

We found that the average traveller lost €80.81 from cancelling their most recent trip due to Covid-19 related factors.

We wanted to look at how many travellers have missed flights and what the most common reasons for doing so were.

Of the 1000 respondents to the survey, 27% said they had unintentionally missed a flight from their local airport. 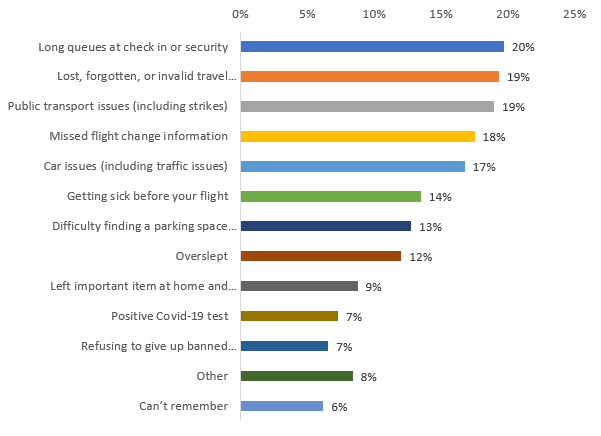 16% of our respondents said that the flight they missed was within the last 2 years, so we wanted to see if the reasons for missing flights differed when Covid related factors were considered.

The most significant change we noticed was that Lost, forgotten, or invalid travel documents became the most common reason for involuntarily missing a flight, accounting for 26% of missed flights. This could potentially reflect the additional forms and paperwork required to fly internationally during the pandemic. 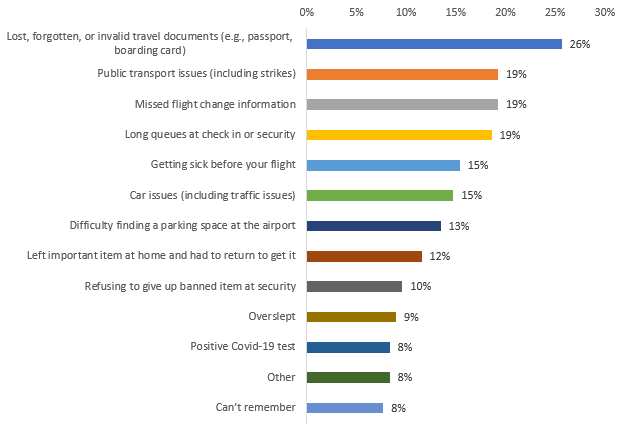 We wanted to find out from which airports travellers have unintentionally missed the most flights. For the airports for which we have statistical significance, Catania Airport had the highest percentage of travellers who have missed a flight from it, however the percentages are all similar and there is no airport that travellers miss significantly more flights from. 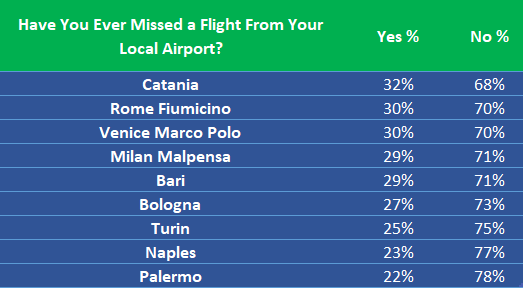 How long before a flight do travellers get to the airport?

We asked our respondents how long they typically get to their local airport before both a domestic and international flight.

Of all the airports included in the survey, respondents who fly from Bari leave the least time between getting to the airport and their flights departure time, while conversely, a significant number of respondents at Bologna airport say they arrive over 4 hours before an international flight!

We also asked respondents, considering the current situation around Covid 19 and factors related to this, whether if they were travelling by plane this month, they would get to the airport any earlier?

As a result of the Covid-19 Pandemic, flyers are getting to the airport on average 12 minutes and 42 seconds earlier

We looked at the average for both domestic and international flights and found that on average our respondents would get to the airport 12 minutes and 42 seconds earlier, which considering some of the lengthy delays seen at Italian airports recently for passengers requiring pre departure swab tests was less than expected.

Travellers aged 55 and over leave less time between getting to the airport and their flight departure time, however they do not appear to end up missing any more flights as a result

We also looked at whether how long travellers got to the airport before their flight differed by age, and we found that respondents aged 55 and over were significantly more likely to leave less time when getting to the airport than younger age groups. The fact that this age group does not end up missing significantly more flights than average may be down to experience!

How do Italians Get to the Airport?

As an airport parking aggregator, we wanted to discover the travel habits and preferences of Italians when it comes to getting to the airport, and crucially whether these have changed at all as a result of the Covid-19 pandemic. Our key findings were,

This was followed by:

Of all the respondents who said they would consider changing how they travelled to the airport due to the Covid-19 pandemic, the most common mode of transport switches were

This data is somewhat surprising as the most common transport modes switches are to more communal modes of transport, where there would potentially be a greater chance of contracting or spreading the virus.

There are many possible reasons for the trend for switching from private vehicles to other modes of transport and with the data we have we can only speculate on what peoples different motives behind this are. Potential reasons could include concerns about the cost of parking at the airport in the context of loss of earnings during the pandemic, or could reflect travellers not feeling comfortable with letting a stranger in their vehicle by using a car park. Alternatively, for some it may simply reflect higher fuel prices.

Respondents at Malpensa were happiest with the public transport connections at their local airport, whilst those at Catania followed by Naples were least happy

Catania Airport’s rail connection (which opened in March 2021) and AMT “ALIBUS” Shuttle did not prevent the airport from being ranked bottom. Napoli lacks a rail connection but is also connected by an ALIBUS shuttle. This has frequently been criticized for overcrowding which could also explain the low score. 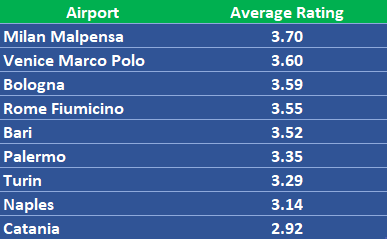 This online survey of 1,000 Adults in Italy who have flown by plane within the past 3 years was commissioned by ParkVia and conducted by market research company OnePoll, in accordance with the Market Research Society's code of conduct. Data was collected between 19/01/2022 and 26/01/2022. All participants are double-opted in to take part in research and are paid an amount depending on the length and complexity of the survey. This survey was overseen and edited by the OnePoll research team, who are members of the MRS and have corporate membership to ESOMAR.)